“This place is a wasteland.  Send them on, Jesus.

There’s not enough here to meet our needs…let alone their needs.”

Do you ever look around your world and feel like that?  The problems and the heartaches seem too big.  The resources too meager.  You’ve seen miracles…seen Jesus work but now you are tired.  That’s the picture I see in Matthew 14.  It reminds me that the end of my resources is the doorway to knowing more about my Savior!

Wastelands appear when human wants rule.  King Herod launched this set up by getting what he really wanted…to kill the one who said he was wrong for what he was doing.  But the will of the Father is never subject to the whims of man.

God works within our broken world to reveal Himself.  Watch Jesus.

The death of John the Baptist grieved Jesus’ heart.  He set out to spend time with the Father.  But the Father’s plan wasn’t a quiet prayer time.  The crowds followed and Jesus’ heart moved with compassion.  He spent the day healing all those who were sick and broken.  As evening approached, the disciples were done.  The practical need for food loomed large–and blinded them to the power of the One who saves.  They had seen miracles all day but didn’t seem to think Jesus could help with simple subsistence.

Ever been there?  The bills climb higher than the checkbook balance.  The demands on your time outrun the clock.  The hurts of life squeeze hope out of your heart.  The passage in Matthew shows the solution.  Lift up the meager resources you see and watch God multiply them.  There is enough because HE is enough.

When everyone was filled, they went on home.  Jesus sent his disciples into the wind…into a struggle against the wind and the waves.  THEN, Jesus moved on with His plan…to spend time with the only One who can make things right in the world.   It would seem that the Father gave Him a new assignment for the story just gets better!  After time with Abba, Father, Jesus went to His struggling disciples.  Fatigue gave way to fear as they saw Him walking on water toward them.  He whom they had watched deliver people all day…healing and providing for needs…was not recognized.  Jesus simply reminded them, “I am the One who saves His people.”

Jesus said, “Come.” ‘Walk on water to get to me…do whatever it takes but come to me.’  That’s what I hear.  Trust me enough to step into reality that you do not control because I am the One who saves.

That’s scary stuff there.  Failure is the only option in the human realm.  And truth is, Peter failed victoriously because He did what Jesus said; He stepped out.  The fact that fear gripped him as he looked around is a side result that opened the door for Jesus:  the One who came to save. 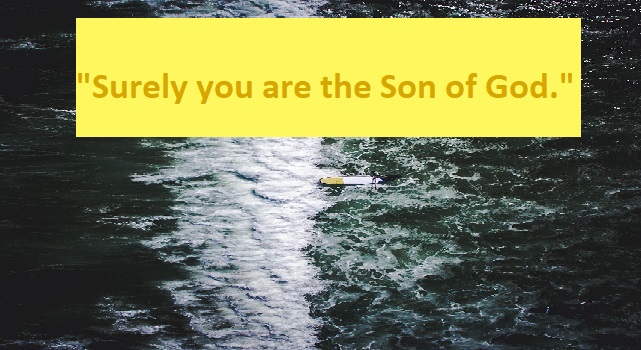 That all will know Jesus is the only result that matters in this world.  When we will trust Him like Peter did, others will know and worship Him with us.  Look at verse 33:  And those who were in the boat worshiped Him, saying, “You are certainly God’s Son!”

What is God asking you to trust Him for today?

I am a thankful, awed child of God and wife to Craig, mom to Rusty and Riesa. My passion is helping others enjoy the presence of God. View more posts

This site uses Akismet to reduce spam. Learn how your comment data is processed.